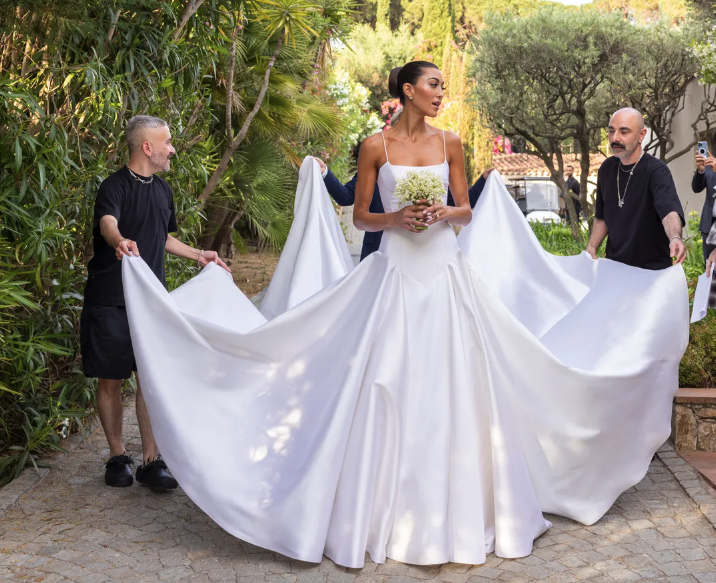 We’re only half way through 2022 and there have already been some sensational celebrity weddings with even more sensational celebrity wedding dresses. From couture Valentino to fun little minis to designers wearing their own custom creations, it really has been the year of the jaw-dropping wedding gown. Every celebrity bride is just bringing the heat! And while there are so many to choose from, I’ve picked five of my top favorites (yes, it was hard to choose) and listed them here in no particular order.

Obviously I was going to include Kourt on this list. And while I loved her Vegas and Santa Barbara wedding looks, I think her third and final look in Italy really takes the cake. I remember when she first got engaged and everyone was convinced she would wear black. But props to her for probably resisting that temptation and making an even stronger statement with a white mini wedding dress. No one was expecting that! Created by the geniuses at Dolce & Gabbana, the mini was reminiscent of lingerie. Little details of lace gave the dress a touch of femininity while the corseted bodice was the touch of sex appeal this couple has become known for. And I can’t forget about the fact that Kourtney paired her mini wedding dress with an extra long hand embroidered veil featuring an image of the Virgin Mary. I think it just goes to show that deep down inside, we’re all veil girls at heart!

When I first saw photos of Nicola Peltz’s wedding gown, I’m pretty sure I gasped. In a word, it is simply perfection. And naturally, that’s what you can expect when the couture gods come down and hand make a celebrity wedding dress. The craftsmen at Valentino can be credited for this one. The process involved Nicola taking two trips to Rome, plus two fittings in America, and a Valentino seamstress on-hand on the wedding day. (Ps. Did you know we offer Wedding Day On-Site Support, too?)

The gown features wide straps with a chic square neckline, a fitted waistline, and a column skirt. The exaggerated train looks fit for royalty and the sheer lace gloves are the touch of romance the otherwise classic bridal look needed. According to her interview with Vogue, Nicola cites 90’s Claudia Shiffer as her glam inspo and all I can say to that is yes girl. Hubby Brooklyn wore a custom suit by Dior.

Cool girl Chloë Sevigny surprised and delighted fans by choosing to wear an ethereal ruffle dress by Jean Paul Gaultier as she married beau Siniša Mačković (for the second time) in her hometown of Darien, CT. The gown is completely sheer save for gathered tufts of tulle trailing down the bodice and skirt. There are also delicate lace appliques scattered throughout and big gauzy shoulders for the ultimate indie vibe. It took me a minute to warm up to this dress, but after putting it in context and seeing how happy the bride looks in every single photo, I think it’s a clear winner. I think what makes it even more beautiful is her simple accessories, the chic slick-backed bun, and a bouquet of long stemmed Calla Lilies.

Make way for my new favorite celebrity wedding dress! If you haven’t seen it all over Instagram lately, then let me fill you in. Designer Sarah Staudinger wore a gown by…well, herself, as she married Ari Emanuel in St. Tropez. The gown features thin spaghetti straps, a fitted drop-waist bodice, and a luscious full skirt that took multiple people to carry into the ceremony. The look is elegant and modern at the same time. I would expect nothing less from a designer who makes her own wedding dress. She also kept accessories minimal or non-existent. No veil or any jewelry (maybe stud earrings but it’s hard to tell in photos) and a simple bouquet. A slick-back bun and glowy fresh makeup just make this entire bridal look flawless.

This one might’ve flown under the radar, but Olympic gold medalist track star Sydney McLaughlin’s dress deserves a gold medal of its own. Her long sleeve fitted gown by Pallas Couture featured intricate beadwork, a modern square neckline, a little volume at both shoulders, an open back, and a gorgeous long train for that added bit of drama. According to her interview with People magazine, she originally went with a ballgown but panicked during her first fitting when she realized it wasn’t the dress for her. She got in touch with Pallas Couture and they were able to make her a brand new gown in 3 weeks! Her former NFL star of a husband, Andre Levrone Jr., would call that a Hail Mary.